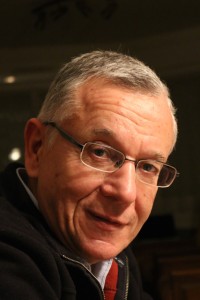 Bio: I am a Research Director Emeritus at the National Research Institute for Agriculture, Food and Environment (INRAE) in Nancy, France. I received a bachelor’s degree from the Plant Biology Department of the University Henri Poincaré-Nancy (Lorraine) in 1979, a Ph.D. from this University in 1982 and a Science Doctorat from Paris XI-Orsay University in 1986. I joined the INRA Forestry Center in 1981 where I built up a research group on the physiology and molecular biology of the ectomycorrhizal symbiosis.

I spent sabbatical leaves at the Department of Biochemistry at the University of California Los Angeles (UCLA) (1986-1987), CSIRO, Perth, WA (1990) and USDA Atlantic Research Center, Wyndmoor, PA (1997). Since 2018, I have also been appointed Chief Scientist at the Beijing Forestry University, China and Visiting Professor at Chinese Academy of Forestry Institute of Subtropical Forestry, Hangzhou, China.

I headed the Tree-Microbes Interactions Department from 2001 to 2008 and the Cluster of Excellence ARBRE (Advanced Research on the Biology of Tree Biology and Forest Ecosystems) from 2011 to 2021. We are implementing a wide range of disciplines – from genomics to functional ecology – to understand, monitor and predict community structures, dynamics and processes in forest ecosystems.

In 2012, I was awarded the INRA Laurel Wreath for Excellence for my work on tree-microbe interactions and fungal genomics. In 2016, I was awarded the Research Prize by the popular science magazine La Recherche. In 2021, I received the prestigious “Angiola Gili e Cataldo Agostinelli” International Prize for Biological or Medical Sciences 2020 by the Accademia delle Scienze di Torino. I have been recognized as a Highly Cited Researcher since 2015.

My research focuses on understanding how fungi drive forest ecosystems through their roles in important soil and biological processes including carbon and nutrient turnover, as well as mutualistic symbioses. Much of this research has concentrated on ectomycorrhizal fungi, which form mutualistic symbiotic associations with the roots of forest trees, and provide phosphate and nitrogen in exchange for sugars. I explore these plant-microbe interactions, in part, by identifying the communication genes (e.g., those coding for effector proteins) and the regulatory factors that drive the mycorrhizal symbiosis development.

I am now developing large-scale comparative genomics of symbiotic, saprotrophic and pathogenic fungi (in collaboration with the U.S. Department of Energy Joint Genome Institute (JGI) to decipher the evolution of the symbiosis lifestyle and ligno-cellulose decay apparatus. I am leading the Mycorrhizal Genomics Initiative and the 1000 Fungal Genomes project aiming to decipher the mechanisms driving the evolution of Fungi. My group is also embarked in challenging large-scale metagenomics and metatranscriptomics projects to explore the interactions of forest trees with communities of soil fungi impacting carbon sequestration in terrestrial ecosystems.

When significant advances are made, our research findings are encapsulated in a manner suitable for release to the media as TV reports, both local, national and international:

I have diverse interests in the biology of plant-microbe interactions, with the unifying theme being the ectomycorrhizal symbiosis. In the upper layers of the soil of boreal and temperate forests, hundred of species of ectomycorrhizal (ECM) fungi establish a mutualistic symbiosis with lateral roots of trees and billions of ectomycorrhizal root tips are continuously generated in forest soils by this community of fungal species. The ectomycorrhizal symbiosis has shaped the forest communities over the last 180 Myear. Understanding how ECM fungi can achieve this lifestyle is my main reasearch goal. I was initially drawn to the symbiotic fungi by the incredible diversity of their fruiting bodies and the realization of their crucial role for tree growth and evolution. I have a long track record in ectomycorrhizal physiology and molecular biology. Following are brief sketches introducing the main subject areas that interest me:

Ectomycorrhiza Metabolism. My early research was mainly on the primary metabolism of ectomycorrhizal fungi, providing the first roadmaps of N, C and P assimilation pathways in several ECM model species.

The Symbiosis Transcriptome Landscape. During the 90’s, I have devoted most of my time to hunting symbiosis genes. Building of the mutualistic ECM symbiosis relies on the orchestration of gene networks  in both partners. Although our understanding of the molecular mechanisms coupled to symbiosis development and functioning need further refinement, we have brought exciting discoveries in this area during the past few years

Genomics of Mycorrhizal Fungi. Our lab currently studies genome organization and evolution of forest fungi, principally symbiosis-forming mycorrhizal fungi. Much of our work is focused on genomics and transcriptomics for studying the development, functioning and ecological traits in ectomycorrhizal fungi and other tree-associated microbes, and soil fungi.

In the wake of the poplar genome sequencing, it was decided to investigate the mycorrhizal genomes and develop the tools to pin down the genes underlying the symbiosis interactions and ecological adaptation. The mycorrhizal community drew up a proposal for the Department of Energy Joint Genome Institute (JGI) to sequence the ectomycorrhizal Laccaria bicolor and endomycorrhizal Glomus intraradices genomes. We obtained the go-ahead in October 2003 and the data started trickling in during early 2005. The Laccaria genome consortium  published the analysis of the high-quality draft sequence of L. bicolor in Nature in 2008 providing important new information about the genetics of the ectomycorrhizal symbiosis. The genome of another ectomycorrhizal symbiont, the Black Truffle of Perigord (Tuber melanosporum), has been released in March 2010 in Nature.

Comparative Genomics of Soil Fungi. One avenue for future research concerns the evolution of the gene families that encode symbiosis-regulated genes. For example, we would like to ask if mycorrhiza-formers and brown and white rot groups of saprotrophs differ in their repertoire of effector-like secreted proteins and lignocellulose decay enzymes, or if the rate of evolution and strength of selection on these genes are comparable in both groups.  To reach this goal, we are studying the genomes and transcriptomes of the ectomycorrhizal fungi Laccaria bicolor and Tuber melanosporum and the arbuscular mycorrhizal Glomeromycota Glomus (Rhizophagus) intraradices. For more information, see: Kohler et al. (2015) and Martin et al. (2016). In these papers, we describe the functional gains and losses that have occurred during the evolution of ectomycorrhizal symbioses.

As of this writing, the genomes of 85 mycorrhizal species have been released and many are publicly available at the JGI Mycorrhizal portal.

Our team is a partner in international networks outside INRAE: the US Department of Energy Oak Ridge National Lab ‘Plant-Microbes Interfaces’ project, the JGI Community Sequencing Program, the Institute of Microbiology, Beijing Forestry University, the Kunming Institute of Biodiversity in Kunming, Yunnan, the State Key Laboratory of Grassland Agro-Ecosystems, Institute of Innovation Ecology, Lanzhou University, Lanzhou and the Chinese Academy of Forestry Institute of Subtropical Forestry, Hangzhou, China.