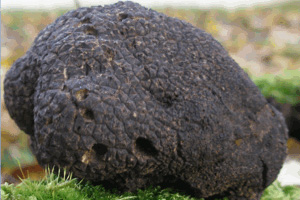 The life cycle of Tuber melanosporum

The Périgord truffle (Tuber melanosporum Vittad.) is endemic to calcareous soils in southern Europe and found in symbiotic association with the roots of deciduous trees, mostly oaks (Quercus spp.) and hazelnut trees (Corylus avellana). The fungus requires a host tree to complete its life cycle and produce hypogeous fruit bodies, so-called truffles. The meiotic spores germinate in the spring producing a vegetative (haploid) mycelium growing in the soil and the rhizosphere. They colonize root tips where they establish the mutualistic ectomycorrhiza symbiosis. Extramatrical hyphae growing in the vicinity of the ectomycorrhizal root systems then aggregate to form fruit body initials. The latter develop a fruiting body which maturates during early Winter completing the truffle life cycle. In the mature truffle the ascogenous heterokaryotic pseudotissues, resulting from an unknown fertilization process after outcrossing, are surrounded by homokaryotic maternal pseudotissues. After meiosis the ascospores are dispersed mainly by mycophagous animals including wild boars and rodents. The spores pass through the digestive tract and are dispersed in the faeces over short distances (several kilometres). Tuber species are found in temperate, mediterranean, and continental climates. They are excluded from tropical, dry (annual rainfall less than 350 mm) and very cold climates. T. melanosporum is endemic to calcareous soils in southern Europe.

The fruiting body of T. melanosporum is an edible truffle (= hypogeous ascocarp or ascoma), which is a highly appreciated delicacy for its complex organoleptic properties (i.e. taste and aroma). The high prize of the Périgord truffle (from 300 to 1000 €/kg) has prompted the development of its culture through man-made inoculation of tree seedlings. It can be assumed that the natural distribution and genetic structure of populations of this black truffle species has been affected by at least five major factors: (i) distribution of its host plant species (i.e. ectomycorrhizal deciduous trees), (ii) the spore dispersal by mycophagous animals; (iii) limiting ecological factors (calcareous soils and a temperate climate), (iv) geographical barriers (i.e. Mediterranean Sea, which limits its expansion towards North Africa) and (v) historical events (i.e. northward recolonization routes from glacial refugia in southern Europe). Phylogeographic analysis of T. melanosporum populations suggested that host post-glacial expansion was one of the major factors that shaped truffle population structure.The fruiting of ectomycorrhizal Tuber spp. depends on a complex set of variables including metabolites and signals produced by the host plant, the nutritional status of the substrate, and unknown environmental cues (e.g., humidity and temperature). The different types of cells and (pseudo)tissues of fruit bodies of ascomycetes (ascomata) are the result of a differentiation process leading to the production of asci containing meiospores. Morphological descriptions of ascoma development in truffles are scarce and mainly illustrate advanced developmental stages. This situation is due to the hypogeous habitat of truffles, which leads to erratic sampling. In addition, symbiotic relationships are required for the development of the truffle fruit body, and fruit bodies cannot be produced in vitro.

Truffles have been recognized as ectomycorrhizal fungi since the early XXe century. T. melanosporum colonizing roots of oak and hazelnut trees is developing typical ectomycorrhizal structures with a well developed fungal mantle, and intraradical Hartig hyphal net. The morphological changes observed in the symbiotic roots (e.g., the radial elongation of root cells) is a testimony of the symbiotic interaction. In addition, inoculation of Cistus and oak seedlings in greenhouses and nurseries with T. melanosporum mycelium lead to an increase plant growth showing that the fungus is a mutualistic symbiont. It has been suggested that T. melanosporum may act as a biotroph with an antagonistic nature in the later stages of the interaction, but this trait remains to be experimentally demonstrated.