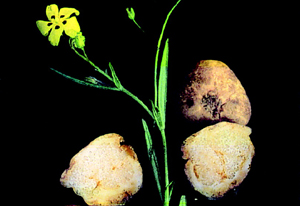 Terfezia boudieri is a desert truffle belonging to the Pezizaceae. It forms ectomycorrhizal associations with several plant hosts belonging to the Cistaceae. Under defined conditions, when grown with hairy roots cultures, the fungus will form either ecto or endomychorrhiza. This unique and important system should allow us to dissect and identify the genes and processes involved in the transition between the two types of mychorrhiza, which are, as yet, an enigma. Physiological studies on inoculated Helianthemum sessiliflorum plants indicate that the higher photosynthesis rates of these plants cannot be fully explained based solely on the improvement in plants' nutrition. Other unknown mechanisms apparently exist, in which the fungus is involved. How does the fungus exert these changes in the host-plant physiology and the signals exchanged between them is not known. Taking a transcriptomic approach will be useful for understanding the role/control of the fungus in the enhanced carbon assimilation and partition. This part of transcriptomics will be carried in the near future.

The desert truffle Terfezia boudierienters into symbiotic association with the host Helianthemum sessiliflorum, a small perennial shrub as well as with other species of this genus (Cistaceae). It is widespread in the Mediterranean basin, in the Arabian Peninsula, Iraq, Syria and Turkey. The truffle produces edible hypogeous fruit bodies that are important in the economy of many countries all over the Mediterranean region where it is used for caning industry, fresh, and frozen products that are exported to European markets. Fruit initials are probably formed in the winter (December) and ripe fruit bodies are collected during early spring (March-April).

Terfezia hyphal cells are multinucleate - hence the determination of the ploidy level is problematic. Based on phylogenetic analyses 3 cryptic species were identified in T. boudieri in Israel. Thus, genetic markers for the races are available. Spores can be germinated and a homokaryotic mycelium culture is available (although it grows slower than gleba derived cultures) for genome analysis. Differential display by AFLP carried on cDNA, from Terfezia-Cistus mycorrhized transformed root system, revealed 260 mycorrhiza associated ESTs. Some of the ESTs were specific to ecto- or endomycorrhizal states and were expressed at different stages of mycorrhization. All sequences were deposited in the NCBI GenBank. BAC libraries and transformation system are currently unavailable. We have pure cultures of all 3 cryptic species.