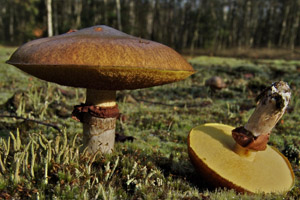 Suillus luteus, so-called Slippery Jack, belongs to the Boletales, a well studied order of Basidiomycetes, with recently sequenced genomes within the genera Serpula, Paxillus and Pisolithus. The large genus Suillus is a sister group of the genus Rhizopogon. Both genera are differentiated by a distinct ontogeny of the reproductive organs. Comparative analysis of these Boletales genomes will contribute to the exploration of the intra-clade variability in symbiosis-related gene repertoire.

Suillus luteus is a cosmopolitan ectomycorrhizal (ECM) fungus whose natural range of distribution matches the range of distribution of its host plants, the Pinus species. It is particularly abundant in young pine forest or planted stands, from the Andes to the Boreal forests. The species is a pioneer, which quickly starts sexual reproduction from large edible sporocarps that produce massive quantities of basidiospores, spread by wind and mammals. It forms conspicuous, though relatively few mycorrhizas from which an extensive external mycelium (long distance exploration type) develops into the mineral soil. It appears frequently on man-disturbed sites wherever pines are planted or start primary succession. It grows easily in culture, rapidly colonizes roots and can be used for inoculation of containerized pine seedlings.

An attractive feature of S. luteus is its ability to evolve metal-tolerant ecotypes. On severely heavy metal-contaminated soils, adaptive metal-tolerant populations develop. These adaptations are metal-specific (Zn, Cd, Cu), genetically stable and result in a physiological adjustment of the ion levels. The genome sequence will facilitate the identification of the mechanisms regulating the metal homeostatic processes and metal detoxification in this species. This will be of interest to a large scientific community exploring the phytoremediation potential of metal-adapted plants and their associated microorganisms.