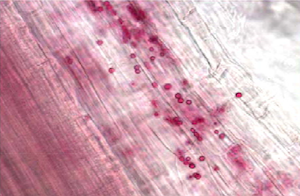 The Australian orchid mycorrhizal Sebacina vermifera MAFF 305830 belongs to the basidiomycetous order Sebacinales (subgroup B). This order encompasses ubiquitously distributed taxa which are basal in the Agaricomycetes with diverse mycorrhizal abilities, ranging from ectomycorrhizae to ericoid, orchid mycorrhizae and root endophytes. Due to their inconspicuous or even absent basidiomes, this group of fungi has been often overlooked and underestimated in its ecological and potential economic importance. The orchid mycorrhizae represent the most basal group with known mycorrhizal capabilities.

During root colonization distinct developmental stages can be identified. Infection initiates from chlamydospores, which upon germination form a hyphal network on the roots within 36 hours post inoculation. In the meristematic and elongation regions, the fungus colonizes small areas whereas an unrestricted net-like intra- and intercellular colonization pattern is observed in mature root segments. Hyphae occupy rhizodermal and cortical tissues after 5 days, but the fungus never proceed beyond endodermis or central meristematic tissue.

Because of the relative ease with which some species of the subgroup B can be grown and manipulated in the laboratory, several taxa including Piriformospora indica and various Sebacina vemifera isolates are now widely used in basic research of plant/fungus interactions. Genome sequencing of Piriformospora indica (Zuccaro et al., 2011) and the present Sebacina vermifera isolate is therefore useful in evolutionary genomics and in dissecting the molecular mechanisms of symbiosis.