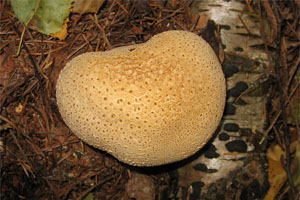 Scleroderma citrinum is a very common and widespread ectomycorrhizal gasteromycete species which produces large conspicuous sporocarps, so-called "earthballs", in different forest environments or adjacent to forest area. The ectomycorrhizal status of Scleroderma citrinum is proven, but in the Scleroderma genus, numerous species appear capable of free-living saprotrophic existence. Unlike most gasteromycetes species, S. citrinum can be cultured on synthetic media and its symbiosis synthesized in vitro.

Scleroderma citrinum is classified within the Sclerodermataceae, a family, which also includes Pisolithus tinctorius and P. microcarpus, ectomycorrhiza-forming basidiomycetes sequenced within the framework of the Mycorrhizal Genomics Initiative. Scleroderma citrinum sporocarps appear early in the fruiting succession of ectomycorrhizal fungi. This is an early stage fungus, primary colonizer of mining waste, which enables to spread rapidly and to colonize young root systems of numerous tree species. Scleroderma genus has a worldwide range and S. citrinum is commonly recorded from mainly northern hemisphere temperate regions. A range of host genera has been reported for S. citrinum, including poplars and eucalypts.

Several research groups worked with S. citrinum to investigate the underlying symbiotic functioning and related beneficial effects on host plants, in particular nutritional benefits. Recently, Scleroderma species have been studied for their role in mineral weathering. S. citrinum mycorrhizosphere was used as a model environment to study the structuring effect of the ectomycorrhizal symbiosis on the taxonomic and functional diversity of mycorrhizosphere bacterial communities, especially the ones participating to the weathering of the soil minerals involved in tree nutrition.