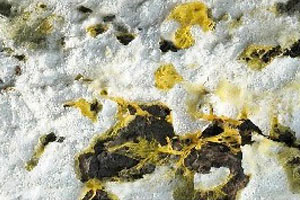 Within the framework of the JGI Mycorrhizal Genomics Initiative, we are sequencing a phylogenetically and ecologically diverse suite of mycorrhizal fungi (Basidiomycota and Ascomycotina), which include the major clades of symbiotic species associating with trees and woody shrubs. Analyses of these genomes will provide insight into the diversity of mechanisms for the mycorrhizal symbiosis, including ectomycorrhizas, ericoid and orchid mycorrhizas.

Piloderma croceum (syn. Piloderma fallax) (Basidiomycota, Atheliales, Atheliaceae) is a broad host range ectomycorrhizal fungus and a common mutualist of both conifer and hardwood species. Typically encountered in boreal and temperate forests, P. croceum is one of the most easily spotted ectomycorrhizal fungi, because of the bright yellow color of its mycelium and ectomycorrhizal root tips.

As a symbiotic fungus, P. croceum is considered to be important for nutrient acquisition of forest trees, particularly that of nitrogen and phosphate. The fungal mycelium emanating from the mycorrhizal roots is highly developed, consisting of prominent rhizomorphs with a range of interconnected, dense hyphal mats. Formation of P. croceum ectomycorrhizal root tips leads to drastic changes in root development, gene expression and metabolism. P. croceum promotes plant growth through an improved nutrition and increased photoassimilation.

P. croceum is an established model fungus for ecological as well as for physiological studies. The fungus is easily cultivable and useful for the dissection of the development of ectomycorrhizal symbiosis. Established plant models for interaction studies with P. croceum include broad leaved tree species, such as oaks and birch, and conifers, such as spruce and pine. P. croceum also induces changes in the soil solution chemistry. The fungus has been detected from the mineral soil horizons as well as on granitic rocks, and has been shown to scavenge ions as a result of organic acid extraction and efficient mineral uptake.

The fungal strain used for genome sequencing was isolated in Uppsala (Sweden) by Jan-Erik-Nylund in 1976.