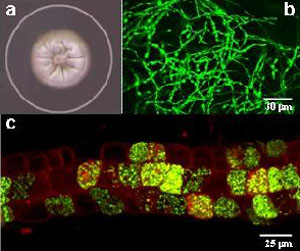 Within the framework of the JGI Mycorrhizal Genomics Initiative, we are sequencing a phylogenetically and ecologically diverse suite of mycorrhizal fungi (Basidiomycota and Ascomycotina), which include the major clades of symbiotic species associating with trees and woody shrubs. Analyses of these genomes will provide insight into the diversity of mechanisms for the mycorrhizal symbiosis, including endo- and ectomycorrhiza. The Ascomycota selected for sequencing represent two distantly related orders, the Pezizales (Pezizomycetes) and Helotiales (Leotiomycetes). The mycorrhizal condition in these two groups is almost certainly independently evolved.

Oidiodendron maius belongs to the phylum Ascomycota, Class Leotiomycetes. In this class few fungi have been sequenced (Botrytis cinerea/Botrytinia fuckeliana, Sclerotinia sclerotiorum). These fungi are characterized by small genomes (40 Mb) and by a low proportion of repeated sequences and this could facilitate the genome assembly as well as the annotation procedure.

O. maius is an interesting experimental organism being both an endomycorrhizal fungus (with ericaceous plants, i.e. Vaccinium myrtillus, Calluna vulgaris), and a metal-tolerant fungus. The metal tolerance is particularly evident for strains isolated from the roots of V. myrtillus growing on heavy metal polluted soils; these strains were demonstrated to tolerate metal concentrations that cause a complete growth inhibition of isolates coming from unpolluted soils. Moreover, there is evidence that this fungus has weathering capacities, as it can modify asbestos fibres.

Finally, O. maius genome sequencing will allow us to make considerable advances in our understanding of the genetic and functional basis of the ericoid symbiosis, still poorly studied. Moreover, this sequencing project would be highly beneficial in our on-going efforts to study O. maius metal resistance mechanisms and to envisage its possible use in bioremediation projects. In fact the genome sequence could facilitate a rapid identification of the genes underlying the extremely high tolerance observed for this fungus.