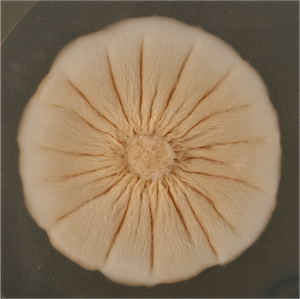 Meliniomyces variabilis Hambleton & Sigler belongs to the phylum Ascomycota, Class Leotiomycetes and order Helotiales. It is sterile in culture. Reproductive structures have so far never been observed and its current classification is mostly based on molecular data (Hambleton & Sigler, 2005). The species, as currently defined, is genetically diverse even at a small spatial scale (Grelet et al., 2010). It is thought to have a word-wide distribution and has been detected molecularly and cultured from both ectomycorrhizal and ericoid mycorrhizal roots in wide array of countries such as New Zealand, Norway, Finland, Germany, Czech Republic, Great Britain, Ireland and Canada (Hambleton & Sigler, 2005; Tederdersoo et al, 2011).

Meliniomyces variabilis forms ericoid mycorrhiza with shrubs in the Ericaceae family, often dominating the undergrowth of temperate and boreal forests (Vaccinium, Empetrum, Calluna). Its ericoid mycorrhizal ability is demonstrated by multi-authored observations of ericoid mycorrhizal coils in hair root cells (Hambleton & Sigler, 2005), beneficial effect on host plant growth and reciprocal transfer of resources, such as carbon and nitrogen, with its host in vitro (Grelet et al., 2009).

Meliniomyces variabilis also colonises ectomycorrhizal roots as an endophyte, and although it does not form typical ectomycorrhizal structures (e.g. no mantle or hartig net), it impacts on its host by modifying the morphology of fine root tips in a manner resembling superficially early-stages of ectomycorrhiza development (Vohnik et al., 2007; Grelet & Brodie, unpublished).

Meliniomyces variabilis strain F was isolated in the fall of 2005, from ericoid mycorrhizal hair roots of Vaccinium vitis-idaea collected in the native Caledonian forest of Glen Tanar (North East Scotland, 57.01 N, 2.52 W). Its rDNA-ITS sequence (Genbank accession number FN179336) is 100% identical with that of M. variabilis strain Hc, isolated from an ectomycorrhizal root tip morphotyped as Piceirhiza bicolorata and collected from the same forest.

With its flexible life-style, as expressed by polyvalence of function and structure and diversity of host plants, Meliniomyces variabilis sits at an interesting cross-road between endophytism and symbiosis. Deciphering its genome will allow us to make considerable advances in our understanding of the genetic and functional basis of mutualistic plant-fungi interactions, and will contribute substantially to the on-going genomes comparison of a diverse suite of mycorrhizal fungi and fungal wood decayers.