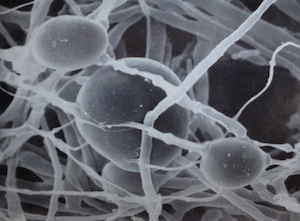 Within the framework of the CSP 'Metatranscriptomics of Forest Soil Ecosystems' project, we are aiming to explore the interaction of forest trees with communities of soil fungi, including ectomycorrhizal symbionts that dramatically affect bioenergy-relevant plant growth, and saprotrophic soil fungi impacting carbon sequestration in forests. We are sequencing the metatranscriptome of soil fungi (i.e., wood decayers, litter and humus saprotrophs, and ectomycorrhizal symbionts) in woody debris, litter/humus, rhizosphere and ectomycorrhizal roots of ecosystems representative of major Earth ecosystems, the boreal, temperate and mediterranean forests. We are also sequencing the genome of the most abundant fungal species harvested on studied sites to serve as the foundation for a reference database for metagenomics of fungi and for a comprehensive survey of the potential soil fungal metabolome.

Amongst the frequent soil fungi, Mortierella elongata Linnem. is one of most common representatives of genus Mortierella, a genus that contains of 150 described species. Mortierella elongata grows saprotrophically in the soil, or as an endophyte in healthy plant roots. Its quick growth is due in part to coenocytic mycelium that has occasional septa and frequently anastomosing, dichotomously branched hyphae. Hyphae often bear mitotically produced chlamydospores and stylospores. Mortierella elongata is considered to be haploid and heterothallic (although some isolates have been recorded as homothallic). Asexual sporulation is not common for this species. Zygospores (meiotic products of the sexual cycle) may be produced in culture, but are rare.

Mortierella elongata is a common and ubiquitous species. For instance, it has been reported from alpine ecosystems of Norway (4 km above sea level), arid agricultural areas of India and deserts, and coastal regions of Mexico. Mortierella elongata grows well in a range of soil types, from pH levels of 4 to 7, and shows preference for litter and upper organic soil horizons. Mortierella elongata has been isolated from forest soils including virgin steppe in Ukraine as well as soils from Duke Forest, where it was found to be one of the most prevalent species of soil fungi. Its ecological function is not clearly understood.

Mortierella elongata belongs to a basal clade of fungi classified as the Mortierellomycotina. Recent phylogenetic studies place this phylum in an intermediate position between the other Zygomycota s.l., Glomeromycota and Dikarya. The Mortierellomycotina are thought to include the first terrestrial fungi to develop distinct fruiting bodies.