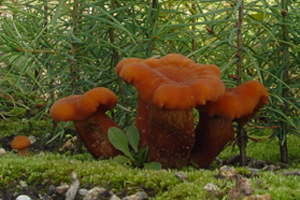 The genome sequence of the basidiomycete fungus Laccaria bicolor S238N-H82

The DOE Joint Genome Institute and the Laccaria Genome Consortium have publicly released the draft sequence of the ectomycorrhizal fungus Laccaria bicolor S238N-H82 in July 2006. This ectomycorrhizal basidiomycete was chosen because it is heavily studied, ecologically relevant and is used in large-scale inoculation of seedlings in forest nurseries.

The genomic sequencing work has been conducted by scientists (I Grigoriev et al.) at the Department of Energy's Joint Genome Institute in Walnut Creek, California. A network of laboratories including the Tree-Microbe Interactions Unit (INRA-Nancy), the Bioinformatics & Evolutionary Genomics Division (Gent University), the University of Alabama, the Microbial Ecology Department (Lund University) and additional teams (Tuebingen University, Göttingen University, Lyon University) is involved in EST sequencing, and the machine and manual annotations.

A whole-genome shotgun approach has been used to sequence the Laccaria genome. Genomic DNA has been fragmented into pieces of 3, 8 and 40-kb, cloned into a plasmid and fosmid vectors, amplified, and sequence reads generated from about 830,000 sub-clones. Sequence reads have been assembled into larger contiguous regions by Harris Shapiro at JGI and these further assembled onto fosmid-end sequenced scaffolds. The Stanford Human Genome Center (Jane Grimwood et al.) is performing finishing work on the draft genome. Final assembly will be accomplished using supplemental information from physical and genetic maps. All sequence data will be freely available to the scientific community.