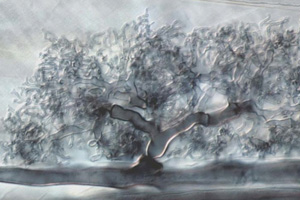 Glomus intraradices is a widespread mycorrhizal fungus (Glomeromycota) found in different ecosystems throughout the world, including temperate and tropical locations. As a symbiont Glomus intraradices is highly effective in mobilizing, taking up and transferring mineral nutrients from soils to plants, and it readily colonizes many plant species including agriculturally important species such as wheat, alfalfa, rice, and key model plants such as Medicago truncatula, Lotus japonicum, and Populus trichocarpa. For these reasons G. intraradices is among the most studied AM fungi and is the prime ingredient in several commercially available inocula. G. intraradices can also be grown in vitro in dual culture with transformed carrot roots. G. intraradices is also the only species whose spores are available commercially in pure form in large quantities.

From an evolutionary standpoint, the AM fungi are unique obligate symbionts with coenocytic hyphae (lacking cellular structure) that transport organelles and nutrients over long distances. The concept of an individual does not apply, raising substantial questions about natural selection and population genetics of these highly unusual organisms.

The INRA GlomusDB database integrates research data from G. intraradices transcriptome and JGI genome projects. The goal of this database is to collect a non-redundant set of all G. intraradices genes and transcripts, and data on their expression patterns, cellular roles, functions, and evolutionary relationships.