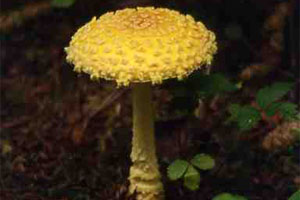 The charismatic Fly Agaric, Amanita muscaria, may be the most widely recognized fungus in the world; drawings of its mushroom are featured in Tintin books, fairy tales, and video games. The fungus grows in mutualistic symbiosis with trees and function as extensions of plants' root systems forming ectomycorrhizae. Exploring how this and related Amanitas move carbon and other elements through forests will enable biologists to more accurately model the biogeochemistry of Earth.

Amanita muscaria (L. per Fr.) Hooker is a filamentous basidiomycete (Agaricales) typically found as mycelia in soils. The morphological species encompasses a complex of eight undescribed biological species . They are geographically widespread symbionts of conifers and hardwoods. We have sequenced a culture of a species named A. muscaria var. guessowii which grows on the East Coast of North America.

Unlike most ectomycorrhizal species, A. muscaria can be cultured and its symbiosis synthesized in vitro. For this reason, it was an early target of research focused on the molecular underpinnings of ectomycorrhizal symbioses and a large body of literature describes the genetics and transcriptomics of the species. But because A. muscaria is an obvious feature of boreal and temperate ecosystems, it has also served as a model for ecological and phylogeographic research. The fungus has been introduced to Australia and New Zealand, where it spreads in association with local Nothofagus and is a species of increasing concern to foresters. A. muscaria offers the rare opportunity to integrate across multiple different subdisciplines and reach an holistic understanding of the biology of a charismatic and common mycorrhizal fungus.

The genome sequence of Amanita thiersii will provide a closely related genome that can be used in comparative genomics to identify lifestyle-related gene repertoires.